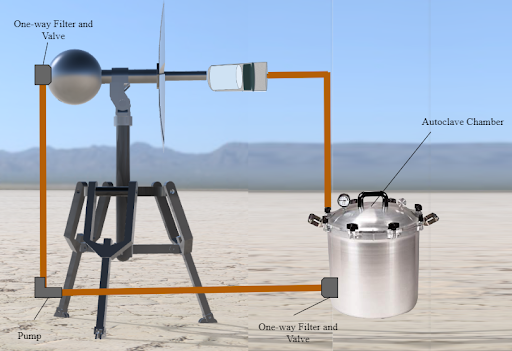 In developing countries, there are limited affordable and accessible methods for sterilizing medical equipment despite the fact that many medical procedures, such as surgeries and immunization shots, require the use of sterile equipment. Traditional autoclaves are used in hospitals and laboratories for sterilizing equipment, but they consume a significant amount of power to create the pressurized steam. This inhibits their usage in developing countries, where access to electric power is limited To address this need, we developed a solar-powered autoclave that can concentrate sunlight and create steam for effective sterilization of medical equipment found in the autoclave chamber. This was done through the creation of a reflective, parabolic concentrator dish with detachable blades, a modified pressure-cooker sterilization chamber, and a tripod design allowing for portability. Therefore, the solar-powered autoclave device fulfilled the purpose of providing a low-cost and low-energy option to sterilize medical equipment in developing countries.

The key component in our device that separates it from similar devices modularity. This allows for easy transportation of the device when manufacturing, easy movement of the device when in use, and provides greater flexibility of situations in which the device can be used. To achieve this the device is almost entirely collapsible due to threaded pipes and the removable blades. The parabolic dish was designed to be 4 ft wide to optimize the amount of sunlight we were able to concentrate and had a curvature of 72 degrees to ensure light was focused to a concentrator 3 feet away from the center of the dish.

The foundation of our device is the three-legged tripod used to support the solar concentrator as well as the water reservoir. The adjustable height and ability to level the device make it extremely adaptable to almost all surfaces and allows for convenient placement of the device. 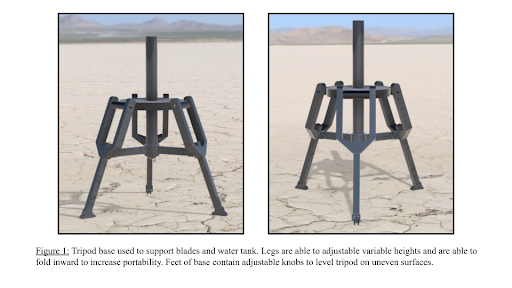 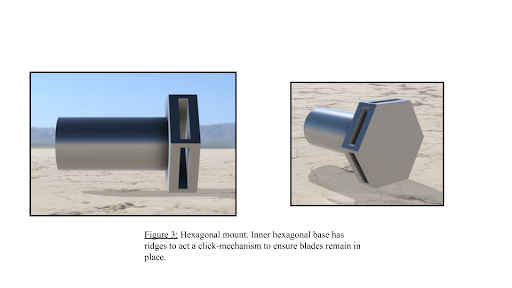 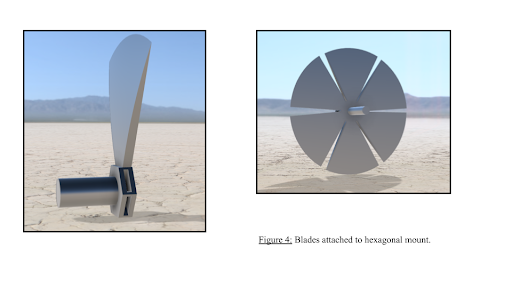 To allow the device to be run continually without constant attention we included a one-foot diameter sphere that can hold roughly 15 liters of water. This reservoir also serves as a counterweight to the solar concentrator. This helps keep the center of gravity within the three legs of the tripod which prevents the possibility of tipping. To transport water from the reservoir to the concentrator and to the sterilization chamber one-inch copper tubing is used due to its ability to conduct heat and its durability. A pump is also utilized to assist the water in reaching its destination. The pump is a simple on/off pump that needs no special requirements. To allow steam to leave the autoclave and recondense into water, the pressure relief valve of the sterilization chamber is connected to a check valve to allow for one way air flow and one-inch steel tubing connecting the chamber to the reservoir. Additionally, a HEPA filter placed inside the check valve catches any particles that may have appeared in the steam before it is transferred back to the water reservoir.

Our steam generator model is composed of a few main parts allowing for water to successfully be converted to steam. As shown in Figure 4, the 3-feet of copper tubing protruding from the blades connects the reservoir to the steam generator. The steam generator is a carbon foam layer topped with a holed sheet of graphite-coated copper metal encapsulated in a plexiglass tube to enable a light-trapping system for steam generation. Although unconventional, this proprietary design was tested and found to heat water up to 86 degrees celsius by itself and allow for a rate of steam flow matching that of the requirements for autoclaves13, so when coupled with the blades concentrating sunlight, it should be able to heat the water to above the 121 °C and meet industry standards.

The sterilization chamber in which the objects needing to be sterilized are placed is simply in a 30-liter pressure cooker with a screw-on lid and 5-way lock. The chamber also contains a pressure relief valve to slowly let the steam out of the chamber to prevent over-pressure. 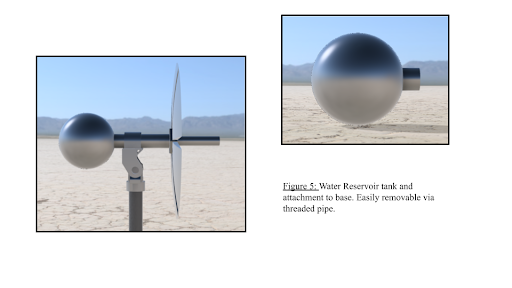